The following article was originally written by yours truly for Your Family Tree magazine issue 165 (Feb 2016), and is reproduced here with a couple of minor updates:

Amongst the records of the General Register Office are many that can help to trace British family overseas. Chris Paton takes a look at the GRO's worldwide offerings...

When carrying out family history research in Britain and Ireland remember that the British Isles once lay at the heart of a worldwide empire. As such, not every birth, baptism, marriage or death necessarily took place at home, with many of our ancestors having ventured forth to the wider world to play their part in the imperial story. In particular, those who served with the armed forces, in maritime trade or in the civil service can often be found recorded within registers kept at sea or abroad. Although such documents are not necessarily difficult to access, they do require a slightly different approach to locate.

Take, for example, the following case study. My great great grandmother Florence Teresa Halliday was identified in the 1901 Belfast census as having been born in Gibraltar in 1863. Her birth will clearly not be recorded in the Irish civil registration records, so where will it be registered? In such a circumstance, rather than visit the GRO for Ireland, we in fact need to turn to the indexes of the General Register Office in England. The Southport based facility may well be where we normally think to look for English and Welsh birth, marriage and death certificates, but the institution also holds many additional registers for overseas events concerning all British citizens. Indexes to these overseas GRO collections are available online in various forms, most accessibly on TheGenealogist (www.thegenealogist.co.uk), but also via FindmyPast (www.findmypast.co.uk). 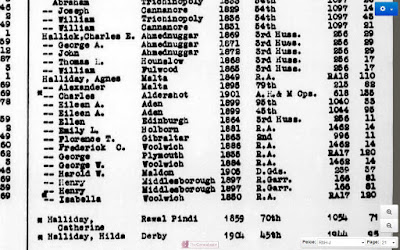 The register indexes come from a variety of sources, including army regimental registers dating back to 1761, army chaplaincy records from 1796-1880, vital records registers from the Greek Ionian islands from 1815-1864 (when the islands were under British protection), consular returns, and much more. On TheGenealogist these are found as the 'Overseas BMDs' database under the 'Births, Marriages & Deaths' heading on the home page. Access via FindmyPast is unfortunately a little more awkward, in that it has integrated the collections into its 'Birth, Marriage and Deaths (Parish Registers)' database. You can narrow your search down within this using filters to concentrate on the respective births and baptisms, deaths and burials, or marriages and divorce databases, but within these you then need to filter down again to look for datasets beginning with 'British', such as 'British Nationals Armed Forces Births 1761-2005'. Thankfully, if you are unsure which collection to search, you can search all of the overseas GRO collections at once on each site, but you will obviously have more search results to work through.

Perhaps surprisingly, neither TheGenealogist or FindmyPast websites currently have an adequate explanation guide online describing the scope of their records, and each site does categorise them slightly differently to each other. For a detailed overview, however, the best place to go is to a cached version of an article on FindmyPast's old help site, the 'Knowledge Base', located at http://tinyurl.com/overseasbmds, which was preserved by the Internet Archive a few years ago. Having read this, you will easily soon learn what TheGenealogist means when it refers to a collection with a title such as 'Article 6/18 Marriage', or what the current FindmyPast site likely contains within its 'British Nationals Born Overseas 1818-2005' set, for example.

The birth for the above mentioned Florence Halliday is found to be indexed in the 'Army Births & Baptisms' indexes, within what TheGenealogist calls its 'Regimental' collection (a similar search on FindmyPast finds the same entry in that site's 'British Nationals Armed Forces Births 1761-2005'
database). As well as the index telling us that Florence was born in Gibraltar in 1863, it also tells us that her father was serving with the 2nd Regiment of Foot, and that her birth is recorded in Volume 996 and Page 11. This important information now allows us to order the original certificate from the GRO at Southport.

This is done through the body's certificates ordering site at www.gro.gov.uk/gro/content/certificates/default.asp, but via a separate part of the site to that normally used for English and Welsh records – you must instead scroll down the page to the section marked 'For overseas events which were registered with the British authorities'. In the case of Florence, the original certificate provided some extraordinary detail, noting her parents and the fact that her father was a corporal in the 2nd battalion of the 2nd Foot, as well as both her birth and baptism dates. This information was enough to enable subsequent searches in the indexes, leading to the discovery of a sibling born in Bermuda in 1866, and the marriage of their parents in Corfu in 1862 (within the 'Ionian Civil Registration Marriages 1818-1864' index). For the latter, the original certificate was particularly detailed, noting the first names of all four parents to the couple – something not found in English, Welsh or Irish certificates from the same period, which only name the fathers.

These are not the only overseas GRO records available online. On the BMD Registers website (www.bmdregisters.co.uk) are a series of additional records as catalogued by the National Archives in collections RG32-36. These include register on board ships, from various overseas colonies, POW records, deaths in France and Belgium in the First World War, records from various protectorates in Africa and Asia, and more. The same records are accessible on TheGenealogist (in the BMD Registers category, located under the main Births, Marriages and Deaths heading), but also on Ancestry (www.ancestry.co.uk) within its 'UK, Foreign and Overseas Registers of British Subjects, 1628-1969' collection.

Note that many overseas records concerning Scots have been transferred to the Scottish GRO, and have also been digitised for access on ScotlandsPeople (www.scotlandspeople.gov.uk), within the 'Minor Records' categories within the civil registration collections for births, marriages and deaths. For example, from 1855 the details of children born at sea on British vessels to Scottish parents were to be recorded by the Captains of the vessels in their Log Books. Upon arrival at UK ports these were to be forwarded by post to the Registrar General in Edinburgh, who would duly record the information in the Marine Register. Similarly, when responsibility for births at sea on merchant vessels was transferred in 1874 to the Registrar General of Shipping and Seamen, he was required to regularly notify the GRO in Edinburgh of any children born to Scots at sea. Other collections include Air Register entries, Consular returns, records from Foreign Countries, High Commission Returns and more. Another important collection on ScotlandsPeople is the Catholic Parish Records (CPRs), which includes the registers of the Bishopric of the Forces records from Aldershot for all Roman Catholics in the British armed forces, not just those from Scotland.

Chris
For my genealogy guide books, visit http://britishgenes.blogspot.co.uk/p/my-books.html, whilst details of my research service are at www.ScotlandsGreatestStory.co.uk. Further content is also published daily on The GENES Blog Facebook page at www.facebook.com/BritishGENES.
Posted by Chris Paton at 11:48