2019 is the centenary year for the first Dáil Eireann, the revolutionary Irish parliament which paved the way for the independence of the Irish Free State in 1922. 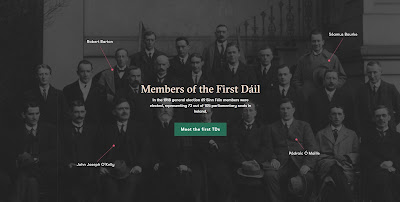 To commemorate this centenary, the Oireachtas (Ireland's parliamentary legislature) has announced that a dedicated website has now been launched at www.dail100.ie. The site provides a timeline of events from 1919-1921, a list of the first TDs (Ireland's MPs), and upcoming events. In addition, a section of the site, Treasures of the Parliamentary Library, will be coming soon, whilst a section marked National Archives - Digitisation of papers from the early Dáil Éireann, has some sample copies of documents from the first Dáil, which are currently being digitised.

The National Archives of Ireland has announced more on this digitisation work in a tweet at https://twitter.com/NARIreland/status/1082660989034741760, referencing work that it is currently doing on the collections known as DE/2 and DE/4, which includes the negotiation files for the Anglo-Irish Treaty of 1921 (the disputed terms of which confirmed Partition and led to the Civil War), as well as the proceedings of the 1st and 2nd Dáil.

Further information on the background to the establishment of the first Dáil Eireann is available at https://www.oireachtas.ie/en/visit-and-learn/dail100/.

For a list of other commemorative events this year, visit https://www.irishtimes.com/culture/heritage/diary-of-events-for-2019-commemorations-1.3751110.

(With thanks to @OireachtasNews and @NARIreland)

COMMENT: A quick note to let you know that one of the biggest additions to my revised second edition of Tracing Your Irish Family History on the Internet is a new chapter on the Decade of Centenaries, and how to research your ancestors who took part in events 100 years ago between 1912 and 1923 from across Ireland.

I completed the first draft of the book today, and will be editing and indexing for the rest of the week - more on its publication soon!