I've received an enquiry about a regiment of Fencibles from Scotland, and as such, thought you might enjoy an article I wrote about the Fencibles in a past edition of the now defunct Discover my Past Scotland magazine.

Tomorrow, I will tell the story of my four times great grandfather, William Paton, who was a soldier in Breadalbane's Fencibles, to show the kind of information that can be found in research. If you have a Fencible soldier, and are seeking information, I may be able to help - see www.ScotlandsGreatestStory.co.uk.

In the meantime, enjoy!

Chris Paton takes a look at a forgotten Scottish army

There have been many famous regiments raised for military service in Scotland over the centuries, but a particular chapter in the country’s history is often overlooked. In 1759 and 1778, units known as ‘fencible’ regiments were raised in parts of Scotland as a form of home guard to allow the regular army to march off and fight overseas. After a short and uneventful existence, they were disbanded in 1783, following the American Revolutionary War.

In the ensuing peace, Britain had reduced its military compliment, and so had found itself unprepared when the French declared war in February 1793. The order was given for the recreation of the Fencible units to defend against the threat of invasion, particularly important in Scotland as there were few militia forces to speak of compared to her southern neighbours. Less than a month later, regiments had been established by some of the country’s wealthiest and most influential clan chiefs and landowners, including the Sinclairs and MacKays in Caithness, the Campbells in Breadalbane and Argyll and the Grants of Strathspey. Initially they comprised of eight companies each, led by a colonel, a lieutenant colonel, a major, and five captains, but by 1794 had grown to ten companies, with some regiments forming separate battalions. There were two types of regiment, the infantry and the cavalry. As infantry they were given regimental numbers, as with the regular army, but were later renamed in favour of the landowners who had raised them, whilst the cavalry brigades were renamed as Light Dragoons.

Sergeants sent out to raise men for their units were under strict instructions not to take on apprentices, deserters from other regiments, or weavers with unfinished webs, unless they agreed to pay a fine for non-completion of the work out of their bounty. Upon passing a medical examination from a local surgeon, enlisted recruits were then paid a bounty of three guineas, out of which they had to buy their own uniforms. This would typically include a scarlet jacket with white cuffs, collar and buttons, a twilled white Flannel waistcoat, a pair of flannelled drawers, a bonnet and feather, three shirts with frills, two pair of hose, two pair of shoes, a comb, a black leather stock and buckle, a leather rose, and a haversack. Some, such as the Rothesay and Caithness Fencibles, wore tartan pantaloons, whilst others, such as the Gordon Fencibles and the Invernessshire Fencibles, wore full Highland garb instead. 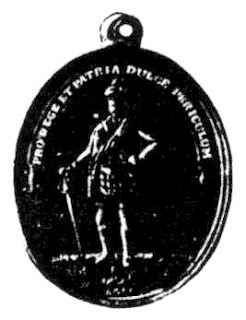 As a home defence force, a great deal of the soldiers’ time was spent in barracks, on various manoeuvres across the country and in performing escort duties, with some sent to perform similar duties in Ireland. In 1798, the United Irishmen rebellion led to many Scottish regiments engaged in fierce fighting in the country, including the Reay Fencibles, the Caithness Legion of Fencible Men, the Fraser Regiment of Fencible Men, the Inverness Fencibles, and others. The Reay Fencibles fought in a major battle against the rebels near Tara Hill, with twenty six of their number killed or wounded in the fighting, though the rebels lost well over four hundred. The Fife and Argyll Fencibles fought at the Battle of Ballynahinch, the turning point of the uprising, whilst the Inverness men also saw serious combat operations, and were renamed as Duke of York’s Royal Inverness Highland Men in gratitude.

An interesting point concerning the regiments which travelled to Ireland is that upon their return they established the Orange Order within Scotland, having served alongside the recently formed Orange Yeomanry within the country. The first warrants granted to establish Scottish lodges went to the Breadalbane’s and Argyll Fencibles between March and May 1798, followed soon after by the Ayr, Tay, Dumfries, North Lowland and Caithness Fencibles. It was not until the early 1800s that civilian lodges were established within the country.

Many soldiers were, however, unhappy about the posting to Ireland. When Breadalbane’s Fencibles were asked to send over volunteers, about half of the compliment refused to go, infuriating those who had sponsored the regiment. George Penny, in his 1832 book ‘Traditions of Perth’, recorded that “Lady Breadalbane, who had taken great interest in these proceedings, was so incensed at their obstinancy, that she is reported to have declared, that she would raise a regiment that would march to the devil if she desired it”. A third regiment was duly drawn up, which did travel to Ireland, with the Earl of Breadalbane granting a medal to each volunteer in gratitude. When these soldiers were subsequently asked to go to Europe to continue their service, they also drew the line at that point and refused. They returned to Scotland, and along with those who had stayed behind were recorded in a final muster on April 18th 1799, after which they were duly disbanded.

A major problem at the time was that many soldiers within the Fencible regiments were beginning to embrace ideas from political pamphleteers such as Thomas Paine, whose “Rights of Man” publication in 1791 sewed the idea in their minds that they were no longer chattels, and had some degree of free will. This led in many cases to disciplinary problems, such as that which occurred in Glasgow in December 1794, again with the Breadalbane Fencibles. Following the arrest and detention in Glasgow of a soldier from the 1st Battalion for an offence for which he had been found guilty, a party of his colleagues armed themselves with muskets and fixed bayonets, and marched to the guard house, where they successfully secured his release. So outraged was Lord Adam Gordon, the commander in chief for Scotland, that an order was given to round up every spare soldier in the city to confront the soldiers to demand the return of the prisoner and the leaders of the mutiny. Before the issue was forced however, the ringleaders voluntarily gave themselves up to Lord Breadalbane without condition. They were escorted to Edinburgh Castle, where the ringleaders were tried and sentenced to death. Three had their sentences commuted, but the fourth, Alexander Morton, was shot on Musselburgh Sands.

In an almost identical situation, a similar mutiny broke out amongst the Strathspey Fencibles later in 1795, when several men were imprisoned following a joke made at an officer’s expense, and then similarly liberated by their comrades. Following a trial of the ringleaders, four privates were sentenced to death. Escorted to Gullane Links at East Lothian, they were informed that they could draw lots to spare two of their number. Charles Mackintosh and Alexander Fraser, who lost the ballot, were then executed in front of their regiments.

Following the rebellion in 1798 the majority of the service performed by the Fencibles continued in Ireland, which in 1801 became a part of the United Kingdom. Other units did see service elsewhere in the UK, with the MacDonald Fencibles sent to the English port of Whitehaven, for example, to prevent the ships of seamen trying to force an increase in their wages from leaving the port. So terrified were the sailors of the Highlanders that they backed own.

When the Treaty of Amiens was signed in 1802, the Fencibles were disbanded, and new regiments then raised to specifically serve overseas. This followed an order given in 1799 which decreed that all units which had been designed to purely serve within the British Isles were to be discontinued.

If your ancestor was in the Scottish Fencibles, you may have to search far and wide to locate their records. Some are held at the National Records of Scotland in Edinburgh, some are held in local archives across the country, whilst others have not survived. A useful guide to help locate those that do exist is “Militia Lists and Musters 1756-1787” (4th edition) by Jeremy Gibson and Mervyn Medlycott, available from www.ffhs.org.uk.

My next Scottish Research Online course starts March 11th 2019 - see www.pharostutors.com/details.php?coursenumber=102. Details of my genealogical research service are available at www.ScotlandsGreatestStory.co.uk. For my Scottish and Irish themed books, visit https://britishgenes.blogspot.com/p/my-books.html. Further news published daily on The GENES Blog Facebook page, and on Twitter @genesblog.
Posted by Chris Paton at 11:41