The National Library of Scotland has updated its Scottish Post Office Directories page to include a new search function. At the Addressing History website launch event in Edinburgh in November 2010 (see http://scottishancestry.blogspot.co.uk/2010/11/addressing-history-launch-report.html) it was announced that an index for the directories would hopefully be online by August of last year, but although delayed it does fulfil the functionality that was promised. The new page is available at http://digital.nls.uk/directories/index.html. 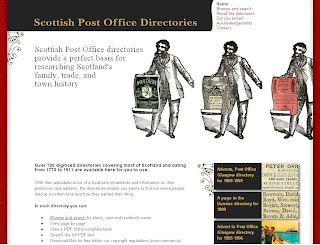 My initial opinion on the new NLS site is that it seems a bit overly complicated and in parts confusing, but that is undoubtedly due to the fact that it is radically different to its previous format. It will take a bit of getting used to. The simplicity of the previous set up was that you could click on a link and be taken to the Internet Archive page where the directory was held. On the other hand, searches on the Internet Archive occasionally do not work, even though the information required is often there - it has just not been picked up by poor OCR.

I have become well used to using the online directories by browsing, as I would at a library, and suspect my own way of working will likely remain the same, even with this new NLS portal. However it is useful to have a second search system, which may well come in handy.

Check out my Scotland's Greatest Story research service www.ScotlandsGreatestStory.co.uk
New book: It's Perthshire 1866 - there's been a murder... www.thehistorypress.co.uk/products/The-Mount-Stewart-Murder.aspx (from June 12th 2012)
Posted by Chris Paton at 14:51